It’s incredible how time flies! Today we are celebrating a special anniversary; Tadesse Gebrerufael (or T as everyone here calls him) has been with Sovereign for 17 years! He was a part of the OG crew back in the first few years Sovereign was starting up. It is said that to be successful in your line of work, you have to love what you do and who you spend the majority of your time with, and Tadesse indeed loves what he does. He genuinely cares about his fellow team members; you can see the compassion he has for each of them by how he treats them not just like co-works but as a family. Tadesse puts all his effort into making Sovereign a great place to work, and with his years of contribution, has played a pivotal role in Sovereign’s success. 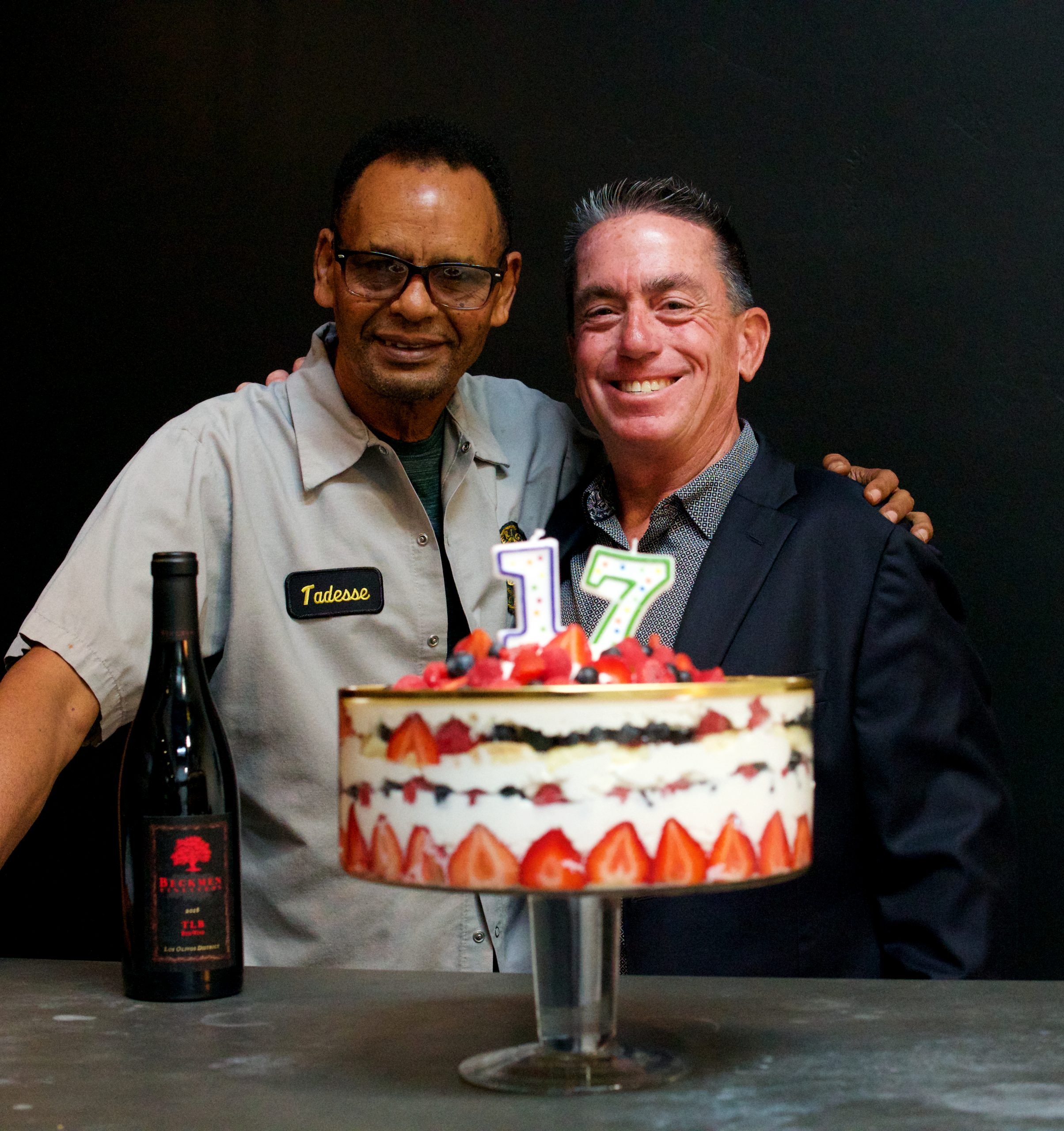 A few of our team members wanted to express what Tadesse’s dedication has meant to them.

“I’ve known Tadesse since 1999. We worked together briefly back then when the companies we used to work for merged, so it was extra special when we ended being co-workers again after joining Sovereign in 2007. I am very grateful for Tadesse, not just for his experience and work ethics but especially for helping pave the way for the Sovereign Flavors that we continue to know and enjoy being a part of today. I believe I would not be where I am today if not for the sacrifices and selfless dedication that Tadesse and the rest of the SF old-timers planted many years ago. Cheers to you my friend! Thank you for the support all these years.” – Ritchie Bolante, Plant Manager

“Tadesse is quick to bring a smile and a laugh to all those lucky enough to work with him.  Now that the Sovereign Campus has expanded I do not get to work with him on a regular basis but I have very fond memories from lunches and Christmas parties back in the day.  Sovereign flavors is lucky to have T on the team.” – Maggie Diasparra (Ward), Applications Scientist

“My relationship with Tadesse goes back 27 years ago, to 1994, when I started in the flavor industry as a sales account executive and Tadesse was working in the plant.  In 1999, I decided to leave the flavor company that we worked at together and one of the hardest goodbyes was telling Tadesse that I was moving on.  My parting words with Tadesse was that I would not leave him behind and when an opportunity presented itself, I would reach out and bring him in. That plan panned out just one year later in 2000, and then again in 2004.  Tadesse was always my go-to guy to get the job done. What a privilege it’s been getting to know Tadesse and working with him at three different flavors companies-the third being Sovereign Flavors, Inc.

My bond with Tadesse started early; learning that he immigrated from Eritrea to this country in December 1983 with no money in his pocket or government assistance. His first job was working at the Goodwill for a few months and then working at gas station where he started to find early success.  Hard work, honesty, integrity, and sense of humor–all attributes that made liking him very easy to do.  Whenever I needed something done, Tadesse was my first call. Tadesse never said no and he would always get the job done.  Some of the craziest days we shared were during the dot com craze where Tadesse would always pick that stock that we would make a quick profit on. There were also those late nights of manufacturing flavors when Sovereign first got started, and also the days where my young kids would come to the plant to visit me.  As soon as they walked through the door, they would ask where Tadesse was and then run into the plant to hang out with Tadesse.  Minutes later, Tadesse would be driving the forklift with one of my boys doing donuts in the parking lot. Memories and stories that will never be forgotten.

The most compelling part of the Tadesse’s story is that he is living the American Dream. When I recently sat down with Tadesse, he was very prideful on where he is at in this stage of life.  He spoke of his beautiful wife and daughter and how happy and fortunate they are.  He talked about his sister, who is still in Eritrea, and how he sends money to her family on a regular basis. One thing that he is most proud of is that he has never taken any government assistance. Tadesse came to America looking for opportunity, and made the most of it; an attitude Tadesse claims is deeply rooted in the Eritrean culture.  It is a real simple concept: he took the first opportunity available, performed at his best, and another opportunity opened up.  Tadesse repeated this formula like the ‘Richest Man in Babylon’. ” – David Ames, Owner